One of the most influential pioneers of the retail industry was an American Businessman called Sam Walton. He founded the Wal-Mart Stores Inc. which grew to be the world’s largest corporation by revenue as well as the biggest private employer in the worlD

AN INSPIRATION FOR RETAILERS: SAM WALTON 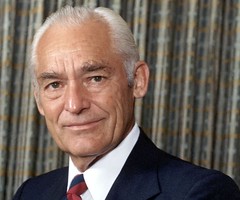 One of the most influential pioneers of the retail industry was an American Businessman called Sam Walton. He founded the Wal-Mart Stores Inc. which grew to be the world’s largest corporation by revenue as well as the biggest private employer in the world. Founded in 1962, today the company has thousands of stores all over the world. Sam Walton had spent years in the retail management business before opening the first Wal-Mart store. Born into a humble farming family in the late 1910s, he grew up during the Great Depression when not just his own family, but everyone else around him struggled to make ends meet. Still a young boy, he took up a variety of jobs like selling of old magazine subscriptions and delivering newspapers. He also milked the family cow, bottled the surplus and sold it to customers; all these in order to contribute to his family’s income and this taught him the value of hard work and determination at a young age. This also showed that he had the spirit and will in him already to become a successful retailer.

He attended the University of Missouri and graduated with a bachelor’s degree in economics. After working for a while at J. C. Penney, he went on to serve in the army during the war years before venturing into the retail management business. He took over management of his first variety store when he purchased a Ben Franklin variety store in Newport, Arkansas. Eventually, he opened the first Wal-Mart store in 1962 which has now grown to include over 11,000 stores in 28 countries.

The company went public in 1970 and the first stock was sold at $16.50 per share. By 1972, Wal-Mart was listed on the New York Stock Exchange (WMT). By 1980, the company had reached $1 billion in annual sales. Ever the innovator, Sam Walton launched the first Sam's Club in the 1980s to serve small businesses and individuals. During the same decade, the first Wal-Mart Supercenter was also opened, combining a supermarket with general merchandise to provide one-stop shopping convenience.

Wal-Mart enjoyed continued success in the years to come and by the early 1990s, the company’s stock worth had surged to $45 billion. Wal-Mart became the nation’s largest retailer in 1991, surpassing even Sears, Roebuck & Company. 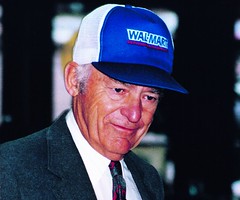 He had a strong belief in giving back to the society. The Walmart Foundation was established in 1979 to contribute to the underprivileged, focusing on the core areas of opportunity, sustainability, and community. Along with his wife, he supported various charitable causes and was active in the First Presbyterian Church in Bentonville where he served as a Ruling Elder and a Sunday School teacher. He also made considerable financial contributions to the church.

From 1982 to 1988, ‘Forbes’ magazine named Walton the wealthiest man in the United States. In 1992, Sam Walton was awarded the Presidential Medal of Freedom, the nation's highest civilian honor, by President George H. W. Bush and hailed as "an American original" who "embodies the entrepreneurial spirit and epitomizes the American dream." In 1998, Walton was included in Time's list of 100 most influential people of the 20th Century.

Walton had stepped down as CEO in 1988 but remained active in the company until his death in 1992.

He definitely built an empire. You can leave a comment below on what you think!

Share:
Tweet
3 Comments
Add Comment
I was not sure if love spell could help but here is my story: I have been in a relationship with my then ex (we broke up for 3 months) since 2015. It was a happy and very active relationship with lots of fun and travelling. We love each other endlessly and we shared a lot. His family was my family and my family his. Few months back he started being controlling and possessive: I told him that I don’t feel comfortable with his new behavior, he apologized and promised to work on himself. But he failed on his promises, this time it escalated to him being manipulative. He accuses me of cheating on him at work. Eventually, I’ll be the one apologizing for something I didn’t do. I broke up when I couldn’t take it any longer. I got a stranger email address from a website that changed my story: I asked the stranger for help to fix my relationship, I told him that my problem was that I am still in love with this guy and I know he loves me too but he has a huge ego, his ego is enormous. I know I am the one who did the breaking up but my heart was hoping for him to say to me ‘I’m sorry baby, I apologize for how I have made you feel these past years, I will seek help and fix myself so that we can fix us’ The stranger is Dr. Wakina, his email; dr.wakinalovetemple@gmail.com Dr. Wakina showered his healing powers to us through his powerful love spell. Our relationship was fixed as he provided the much-needed help to us. Our destiny was changed for good.
Reply
URGENT AND EFFECTIVE POWERFUL LOVE SPELL CASTER WHO RESTORED HAPPINESS IN MY RELATIONSHIP am here to share with you my life experience on how a great man called Dr gbojie saved me and my marriage.I have been Married & Barren for for 5 years i had no child. i have never been pregnant i was a subject of laughter from my Friends & neighbors, i almost lost my marriage because of this issue.i was so confused that i did not know what to do until i came across this great Dr online and i contacted him at once i was scared weather it was going to work because i never believed things like this before, so i decided to give it a try and i did all what Dr gbojie asked of me and today to my greatest surprise i took in the first time and i gave birth to a bouncing baby boy and now my marriage that was about crashing before is now restored. my husband now love and want me better, Am so happy for everything that have been happening in my life since i met this Dr gbojie .I want to tell all the women/men out there who have a similar situation like mine,that the world is not over YET they should dry up their tears and contact this great man and their problem will be gone or are you also having other problems you can also contact gbojiespiritualtemple@gmail.com,gbojiespiritualtemple@yahoo.com His spells is for a better life OR call his number +2349066410185 website : http://gbojiespiritualtemple.website2.me blog : https://brokenmindmend.blogspot.com
This is a testimony about the good work of a man who helped me make my marriage work again. My wife just suddenly hate sex we tried all method non work it became so bad that she had to move out with the kids 12 years and 3 months of marriage. I had to seek for help outside the box, On one faithful day, as I was browsing through the internet, I was searching for solution I came across series of testimonies about this particular spell caster called Dr.Wealthy Some people testified that he brought their Ex back, some testified that he can cast a spell to stop divorce. Etc. There was one particular testimony I saw, it was about a woman called Maria Jose from Atlanta, USA who testified about how Dr.Wealthy brought back her husband in less than 72 hours that got me intrigue. After reading all these,I decided to give Dr.Wealthy a try I contacted him and explained my problem to him. In just 6 days, my wife did not only came back to me but she now love sex and she is no longer scared of it. Dr.Wealthy is really a gifted man and i will not stop talking about him because he is a wonderful man. If you have any problem and you are looking for a real and genuine spell caster to solve that problem for you Dr.Wealthy is the answer to your problem. Here’s his contact.. wealthylovespell@gmail.com or +2348105150446.
Reply